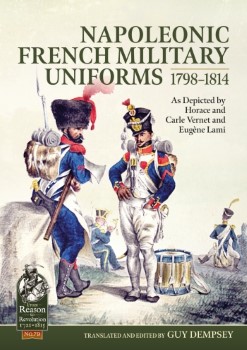 PRICE:
£22.50
Description:
"184 pages 103 colour illustrations. Mint pbk. Three talented French artists, Carle Vernet, Horace Vernet (son of Carle) and Eugene Lami, capitalised on the wave of nostalgia for the First Empire brought on by the death of Napoleon in 1821 by producing a series of prints of French military uniforms of the French revolutionary and imperial armies. These colourful lithographs, each accompanied by a text by an unidentified author describing the unit depicted, were published in book form in 1822 as Collection des Uniformes des Armees Francaises de 1791 a 1814 (Paris: Gide fils, 1822). The broad range of uniforms depicted includes many from infrequently-illustrated foreign and auxiliary units in the French army. The images also include unusual back and side views of uniforms."

This search engine will allow you to find books based relevent to the keywords you enter above.

Enclosing your search terms in " (quote marks) means that this phrase will be searched for literally (i.e. "Flames of War" will only find books with the phrase Flames of war present).

By placing a plus or minus ( + / - ) in front of a keyword, you can force the search to either include or filter out certain keywords
(ie. "+WWII -German" would search for all World War II books that are not about Germans).

Your Shopping Cart is Empty