EAGLES OVER THE ALPS Suvorov in Italy and Switzerland, 1799 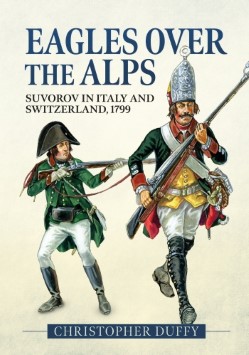 PRICE:
£34.50
Description:
"Christopher Duffy. 304 pages Hardback 72 b/w illustrations & photos, 34 b/w maps. reprint edition. Russia's greatest soldier was at war in Italy and Switzerland. Led by Suvorov, believed by many to be the equal of Napoleon, the Russian and Austrian troops claimed one victory after another against the French. Much more than strategy and tactics, this a story of adventure as a Russian army fights desperate rearguard actions, and tries to escape through cruel mountain passes in the night. Suvorov's memory is still treasured in the Russian armed forces today. The last and greatest campaign of this legendary soldier has found a fitting narrator in Christopher Duffy. Suvorov's marches and battles can be traced on the many maps, photographs, and original artwork recreates the appearance of the troops."

This search engine will allow you to find books based relevent to the keywords you enter above.

Enclosing your search terms in " (quote marks) means that this phrase will be searched for literally (i.e. "Flames of War" will only find books with the phrase Flames of war present).

By placing a plus or minus ( + / - ) in front of a keyword, you can force the search to either include or filter out certain keywords
(ie. "+WWII -German" would search for all World War II books that are not about Germans).

Your Shopping Cart is Empty